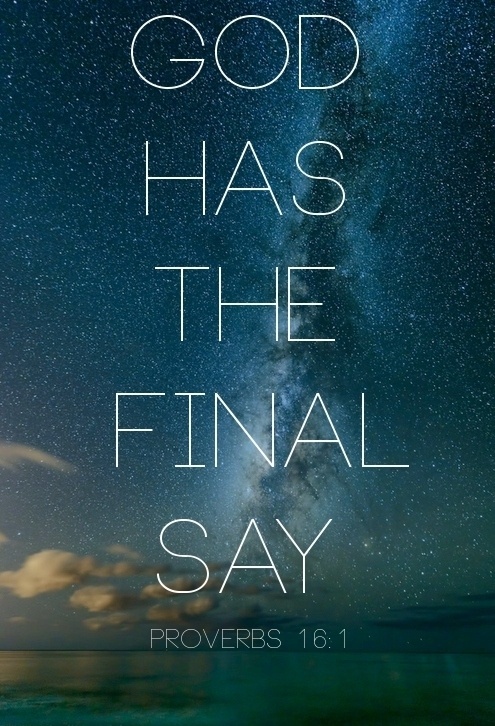 I have the LAST SAY, says the LORD. My judgement stands! None can go to a court of appeals to nullify My WORD, for it cannot be changed, denied or undone. I have spoken and it shall stand, for I watch over My WORD to perform it. Nothing will alter the WORD that I have spoken over you, says the LORD. I have decreed in heaven from My throne what shall transpire in your life. Do you think that devils can defeat you? Do you think the dark one has a word that can change MINE? Did you think that I was beside Myself when I declared My WORKS over you before the foundation of the earth? I knew you then, before you were conceived, and I know you now. My Word stands, and no power can defeat it or change it or stop My Word from being done in you as I have spoken, says the LORD.

Opposition to My Word over you does not make Me nervous, says the LORD. Don’t let those who oppose you become lord over you. I AM THE LORD! Circumstances that threaten to set you back or keep you from what I have spoken over you will not defeat you. I AM GOD! There is no power that can delay My purpose and stop you from certain victory that I have given you. Even as My disciples of old got into the little ship to go onto the other side as I commanded them to do, the sudden storm came to stop them. But the storm could not deter My will or plan and command and it will not do so to you either. Do not fear the sudden storms, for I will suddenly come on the scene and bring you safely to the other side, untouched, unharmed and on schedule. I Am with you in the storm, and it will not destroy My work in you, defeat My purpose in you and you will know that I cannot be defeated, and neither will you be. For you will go from faith to faith and have victory upon victory in Me, says the LORD.

30 Responses to I Have the Last Say