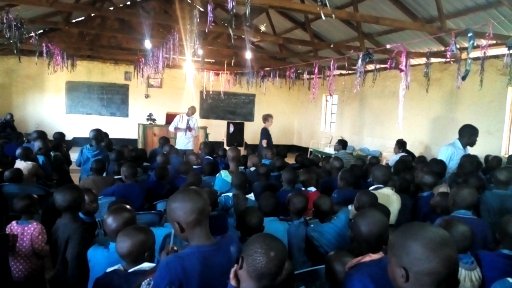 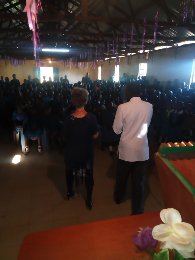 I have completed my sixth mission to Africa, and am back in America after the longest mission trip that I have ever been on thus far. It has been the most powerful and the most perilous of all of them. Not only did I obey the voice of the Lord, but I more than doubled my time there in this very fruitful field.

I saw more trouble than I ever imagined. Instead of folding my hands and quitting because of the pressures and the problems and the violent attacks of the enemy, I EXTENDED MY STAY.

Double time meant double trouble and double miracles? No! The problems were more than doubled, the trouble was on every side, and the miracles were more than ten times greater than any other mission. Souls were reached beyond my comprehension. Drunkards were delivered, saved, healed and empowered by the HOLY SPIRIT.

Literal leprosy was cleansed and healed. Totally blind eyes were opened. Those who sat in darkness saw LIGHT in the physical and spiritual realm. They were translated out of darkness and defeat and disease and the diabolical works of the devil into the kingdom of GOD that is without end. Their lives were forever changed as they were born again, washed in the precious blood of the Lamb, cleansed from all unrighteousness and divinely empowered by the Holy Spirit. Their lives were changed forever as their names are now engraved in the Book of Life.

Redemption, Salvation, Healing, Deliverance, Transformation! The work of the HOLY SPIRIT could not be stopped, overpowered or destroyed, regardless of the perils. NOTHING could stop the Work of the LORD as it was not of this world, but by His Spirit that is unrestrained and unrelenting. What a mighty GOD we serve, who cannot be overwhelmed, defeated or delayed!

We are witnesses! We are conquerors! We are undefeated, regardless of the troubles on EVERY Side. God’s Word is TRUTH that cannot fail.

That is exactly what GOD did, and that is exactly what I did, regardless of the threats, the troubles, the trials, the tribulation, the opposition, the constant attacks of the enemy, the perils. The power and presence of GOD was GREATER, and I refused to quit, regardless of the trauma, drama, difficulties that occurred EVERY DAY. The works of the devil could not stop the working of the HOLY SPIRIT in EVERY PLACE that the soles of My feet touched on the grounds. No matter where I was, no matter where I went, no matter what happened, people were divinely saved, healed, delivered and empowered by the SPIRIT of GOD who SENT ME THERE for HIS PURPOSE.

We suffered, but we reign with Christ as a king. We conquered the troubles on every side. WE overcame everything by His blood. We defeated every foe by His great power that could not be defeated. We give GOD the glory, who does all things well!

I would not have you ignorant of the problems we faced daily. I did not record all the miracles, and I did not log the constant trials and tests and tribulations. I endured the hardness, overcame and continued, NO MATTER WHAT!

The car broke down in the middle of no where again and again. We were stranded. We were suck in the rain, the mud, and even a bridge had collapsed. The river overflowed on the dirt road. We almost went into the river below at one point. I helped push the car in the rain and mud. The team was drenched with rain, covered with mud, but we continued the mission. Money was critically LOW and we had a one hour window to get money wired to us on a Friday to carry us through the weekend. The money was sent ON TIME! God is always on time.

WE were delayed but never denied. People waited for our arrival in venues all day from morning until evening as we struggled to reach them. Their wait was not in vain as miracles happened and instant healing took place. In most places, 100 percent were healed, delivered and empowered by the power of the Holy Spirit. The perils could not stop the power and the evident power did not keep us from experiencing MORE CONSTANT PROBLEMS that we faced daily and overcame!

I became violently sick on two occasions, to the point where my team wanted to call an ambulance and get me to the hospital. I refused to go, and experienced deliverance and healing. I could not stand, speak, move or function at one point, only to recover from the attack of the enemy and make it to the venues. It scared my team. They saw. They also PRAYED, and they learned from Me that the just shall live by faith. Faith in GOD not man. Faith in His faithfulness.

I ministered healing to others at times when I was under severe attack. They were instantly healed. I endured. God never failed them or me. We are more than conquerors, more than overcomers in CHRIST.

Even after venues where the miracles were poured out, we suffered from the bad roads ,the attacks that were constant, the perils. We were stuck all night with the car being broken one time. NOTHING stopped us. NOTHING stopped the power of GOD. NOTHING! Absolutely NOTHING.

His strength was made perfect in weakness. After near collapse, not eating or drinking all day, vomiting, I went to two venues and saw miracles after miracles when ministering for four solid hours. The people did not even know I was weak as the LORD empowered me to minister to them. THAT IS GOD!

My cell phone was destroyed in the muddy water. I lost my contacts, lost my pictures and videos, lost my ability to reach my family. I continued. No matter what came our way, it came to pass.

God did exactly what He said He would do, and I also did everything He said I would do. His word never falls to the ground, but accomplishes everything He sent it forth to do. Indeed, I was sent by GOD. Indeed, He used me for His glory. WE give all GLORY to GOD.

I am not going to begin to convey all the trials we endured or even share the multitude of miracles that took place in every venue. It is recorded in heaven. I will return to the mission field when HE SENDS ME. I will do HIS WILL! He will perform HIS WILL, always. That is what I live for, and nothing else.

The cost was GREAT, personally, financially. The rewards greater! There is NO amount of money that can purchase the salvation of one soul. There is no amount of gold and silver in the world that can open ONE BLIND EYE or one deaf ear! Yet many were opened. Many delivered. Many saved. Many lives were changed by the power of the HOLY SPIRIT in every place I went.

I prayed for people on the street, in the repair garages, in houses, at hotels, restaurants, and venues with all being healed, saved, delivered and filled with the Holy Spirit, and I give all the glory to the Lord, who does all things well.

We need partners who will help us to reach the nations for the Glory of GOD.  No one can do this alone.  How can they hear without a preacher? How can they go if they are not sent? It costs money for airline tickets, for travel in the countries, for accommodations for my team members and myself. Without funding, I will not be able to go. Please prayerfully consider supporting our ministry so that I can return to the mission fields to reach them for the Kingdom of GOD that is without end.  For time is short, the laborers few, and the harvest great.

Thank you for your support. Each of you that partner with us will also have a share in the harvest of every soul we are able to reach, and God will bless you with the increase.

To donate, you can use the donation button on the website of propheticlight.org, or send your donations directly to:

Good Is My Word for You