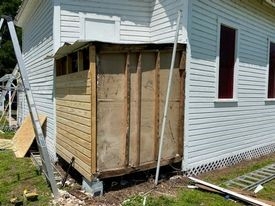 I called it the “Adam’s Family” Room at the church. It was named after the very old comedy television program called the “Munsters”. They were the “Adam’s family.” Cobwebs were everywhere in their house.

That room was spooky to me because of the cobwebs. I did not want to open that door unless I HAD TO! Although we had fixed it many times over the years on the interior and exterior, it really needed to be torn down. It was recently suggested that we totally remove the room and put an exterior door there.  That proposal was also very expensive!

But I made a final plea for the room to be saved. I was balancing the cost of framing an exterior door or having the room completely reconstructed. Believe me, it was NOT worth saving! Since it is historic, the siding HAD TO BE the original. The internal framing boards all had to be replaced (sides and celling). When the exterior is completed, the inside will have to be completely redone, including the floor boards. We could not put a new roof over a rotted room.

My voice was HEARD! The framing has been completed, the new siding has  been replaced. The roof boards will be done next. My privileged task  is to prime and paint it next week. That is just the beginning! When that is complete, the inside has to be completely redone, and I will also prime and paint it. When the floor board is replaced, I will again carpet the floor as I did the previous one. I am a carpenter’s daughter, and construction was part of our heritage. We all engaged in pounding nails, building, constructing, painting, designing, restoring!

THIS ROOM IS A PROPHETIC SIGN! NOT WORTH SAVING, but the plea is to MAKE IT NEW! Jesus could not dwell in an unclean place. WE were alienated from God our Father because of our sin. We were NOT worth saving! WE could not be fixed. We had to be recreated! We had to become a NEW CREATURE in CHRIST before we could have access to the FATHER. Rather than destroying us, He cleansed us by His OWN BLOOD, made us completely NEW by HIS Death on the cross. The cost was great, but the price was paid. We were the beginning of, “Behold, I Make all things new!”

It began with you! A transformed life began by your receipt of Jesus Christ as your personal Savior and LORD. He did it for you–a final plea! GOD looked at our lost condition and sent His SON. Jesus came, and laid down His life for us. The Holy Spirit revealed Christ to us, and we were saved, restored, reinstated in friendship and fellowship and sonship with GOD our Father. The price was too great, but GOD’s love for us was greater than our impossible condition! His voice was HEARD!

Behold, I Make all things NEW, began with each believe, but does NOT END THERE! There are situations in your life that are totally hopeless, beyond repair, and impossible to restore. BUT NOTHING IS IMPOSSIBLE with GOD. He can take the lost dreams, the destroyed vision, the decayed situations and RESURRECT THEM. IT would be easier to just abort and abandon what seems to cost TOO MUCH, but HE IS THE RESTORER of our souls. He is the ONE who can and will make all things NEW!

IT IS TIME for a NEW beginning, a transformation, a restoration of the impossible! NEW LIFE! It may not seem sensible to
invest in what appears to be NOT WORTH IT, but the final plea is RESTORE! Behold, I MAKE ALL THINGS NEW, for you!

To Help us to restore Prophetic Light Church, please use the donation button on our website: propheticlight.org, or send your much needed donations to:

Thank you so much for your prayers and support! We cannot do it without you! Prophet June Sheltrown

Your Times and Seasons are In My Hands

Powerful Verbal Prophecy: I Am GOD That Changes Not