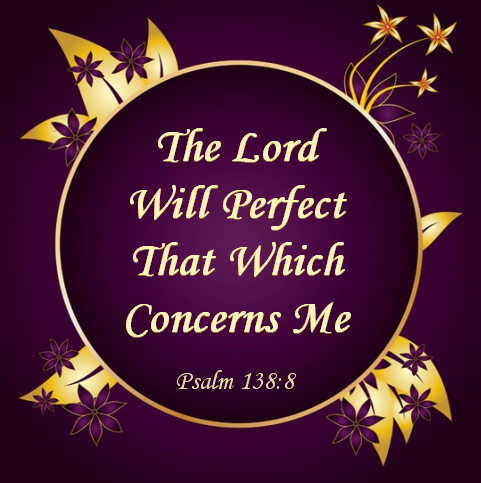 I will perfect that which concerns you, says the LORD. Yes, I will. I will remove the flaws and the spots and the winkles and the blemishes as I purge and purify you. The fiery furnace of afflictions will not destroy you or defeat you or weaken you or harm you, but I will use even these things to MAKE YOU STRONG, pure, holy, undefiled, powerful and undefeated. You will not even smell like smoke from the flames of fire, but everything that the enemy used against you will be used against him. It will have the opposite results. You will be powerfully promoted as I give you the complete victory, and you will overcome by My power of My Spirit that I have invested in you, and evil will not abound, but righteousness will prevail, says the LORD.

You will have favor with Me and others, says the LORD. For I will pour out My SPIRIT of favor and grace and mantle you with it. You will not even care that you have suffered, for it will be light affliction compared to MY GLORY to come that will be revealed in you. You will weep no more, but rejoice in the land of the living, as you will have POWER that you never dreamed of that comes from ME, and you will never regret your steadfastness through the trying of your faith, and you will see that evil could not overpower you or overtake you, but MY righteousness will reign and be revealed, and you will REJOICE and BE GLAD, says the LORD.